One of my dreams came true last winter. I have dreamt of visiting New York ever since I can remember! The lights, the buildings, the shows, the chaotic atmosphere; it all  so endearing!

My dream was came true last winter, when my boyfriend, Stephen, surprised me with a trip to one of the most magical cities to go see at winter – New York. Tears filled my eyes when I got on that plane. I couldn’t believe I was actually going to visit New York!

And it definitely didn’t disappoint!

Time square: The very first thing we did was, of course, go visit Time Square! It’s hard to describe time square without using the word, mad! Everything about it was mad; the lights, the cars, the yellow taxis, the crowds of people no matter what time it was – just all mad! There is a seating area for people who love to people watch and soak in all the atmosphere (like me)

Rockafeller center: The Rockafeller center is absolutely magical in winter. They have the largest Christmas tree I have ever seen which is towering over an ice rink. If it had been snowing, it would have been the perfect winter scene. The Rockerfeller center also offers (in my opinion) the best view of the city. Unlike the Empire state building, you can view the whole city including Central Park plus you get a get picture of the Empire State building itself! 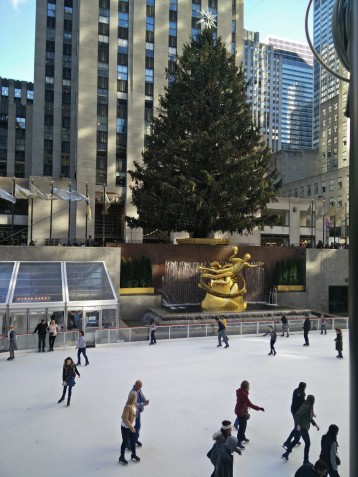 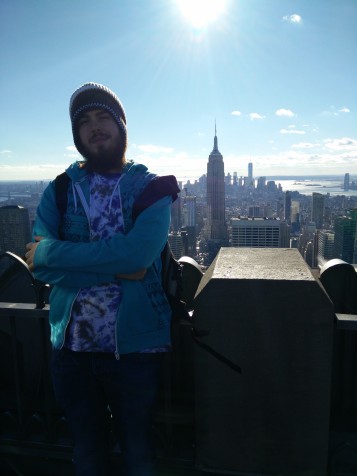 Went to see a show: The one thing I NEEDED to do in New York, was to go see a show! There were plenty of shows to pick from but we both decided upon Chicago. It was great! Everything I wanted from a show; singing, dancing, over the top-ness and of course a man dressed up as a woman! We purchased the tickets a day before the show at discounted prices. It’s not hard to find places where sells ‘cheap’ tickets.

Central Park: ooh Central Park! I adored going to Central Park! It was incredible to be surrounded by nature but see the skyscrapers peeking over the top of the tree, to see squirrels stashing their last acorns away but hearing the horns beeping only  a few meters away. However, Central Park isn’t just for people to hide away from the concrete jungle, you can also get a horse and carriage ride around central park, find the they replica of the friends fountain and go visit the zoo that inspired Madagascar.

National History Museum: This museum is huge! You need a whole day in it to get to see even half of the displays! I’m not a big fan of museums but Stephen adores dinosaurs so we spent the majority of the time in the dinosaur section (where Ross, from ‘Friends’,worked) 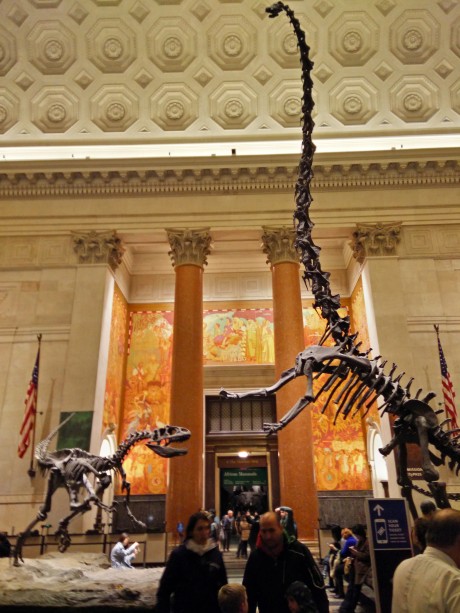 Applebees: Wow! Their steak, is incredible! However, if you have heart problems or high cholesterol, I suggest you stay clear of here as 90% of the food is over your daily intake of salt!!

Planet Hollywood: This a real cool place with excellent burgers! A scene from Pulp fiction was shot in one of these chains. They have different film memorabilia on display and a gift shop. It’s like Hard Rock cafe but instead of it being centered around music, it’s centered around classic films. P.S they will make a song and dance if its your birthday! 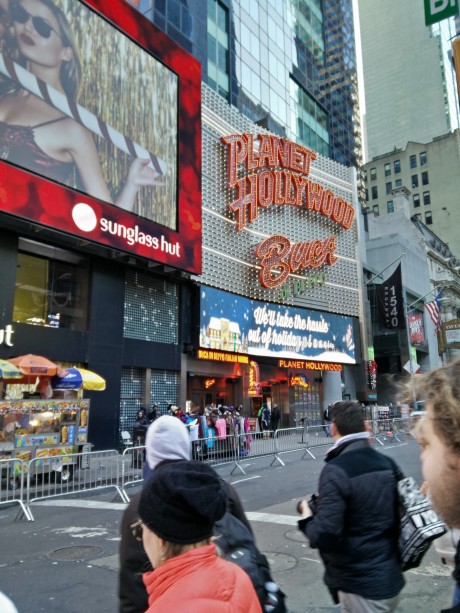 Stardust: We didn’t actually get to eat here because the line was always to long for to even consider it BUT it s suppose to be great! All the waitresses are wannabe Broadway actors/singer so they perform and sing for you while you eat!

We stayed in Hotel Pennsylvania on 7th Avenue, across the street from Madison Garden and within walking distance of time square! If you don’t like hearing horns beeping and  shouting at all hours of the night, this may not be the hotel for you!

Hostels and hotels in NYC city centre are pricey and the cheap hostels look disgusting but HI NYC hostel is central, has great reviews, clean and affordable. For more accommodation  that suit all your needs in NYC, click here.

To conclude, New York should definitely be in your ‘need to go see before I die’ list as its just one of those places that is completely mad but wonderful! GET BOOKING!